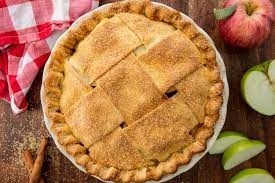 The Taste Of Humble Pie

The markets of the pandemic are history making in almost every way possible.  One day the history books will look back at this period and explain exactly WHAT happened but until we get to the other side it is hard to tell in real time what is actually happening.  It is almost as if the markets are their own natural existence much like the virus and analysts are trying to explain it the same way scientists tried to explain how the virus works.  Just like recommendations for how to deal with the virus changed rapidly and have only become more accurate in hindsight, the same thing is playing out in the markets.

While there are many pundits that are arguing about what is causing these massive swings in almost every asset class from lumber to tomatoes to crypto to meme stocks to housing, the point is moot.  The reality is there are a number of factors all converging at the same time and knowing what causes this recipe to sour will only be known after the fact.

Never before in my career have I witnessed such cult like mentality when it comes to certain investments.  It almost reflects our current political climate in the United States where you have your view and anyone who opposes it is clueless and nothing will change your mind.   What is amplifying this behavior is the proliferation of social media and how everyone can have a voice regardless of credentials.

This easily accessed information coupled with the free time everyone has as they work from home has been the perfect recipe for one of the biggest speculative mania’s we have ever seen.  In the past 9 months I have had more inbound inquiries about the merits of different investments than in the past 17 years combined.  What is most fascinating about this is that the actual homework and due diligence done is virtually non-existent.  Almost every TIP was received from someone making a fortune with KNOWLEDGE of why those gains are going to continue to the moon.

Secular downturns in asset prices (ones that last for years) are born from excesses.  This is something that has been around forever and has not changed.  Excesses happen from overconfidence and jealousy as people watch others get rich and want to be rich as well.  These excesses continue to build and build and build until the system cannot maintain this any longer and eventually nature heals itself.  Fortunes will be made and lost and the majority of people will experience the latter (Remember most people only tell you about their winners).

Currently one does not have to look hard to spot excesses.  Crypto currencies are a perfect example of excess.  There have been fortunes made in crypto over the last several years and many people believe this is the future.   I am not here to argue whether it is or it isn’t.  Frankly, you can know nothing about the technology and just study the psychology and behavior around it to know where it will end up.  Just look at all the “joke” crypto currencies such as Dogecoin, Pirate Chain, Poo Coin, and a handful of others being created out of nothing.  This is the poster child of a speculative mania that is not sustainable.  Blockchain technology may be revolutionary and the future, but human nature is greedy and this greed is what fuels these gains and eventual collapses as supply from those seeking quick riches saturates demand.  What is even more fascinating is the overconfidence that people have in the FUTURE of this technology and how they will blindly follow GURU’s into these investments with little to no real understanding of what they are invested in.

Here is a chart of Bitcoin with a few headlines.  There are several other large players that have commented on bitcoin and crypto on almost a daily basis that explained how this was the FUTURE and it was a store of value.  In fact, Tesla bought it in February to hold instead of cash on its balance sheet.  There were other companies such as MicroVision that continually raised money through stock and bond issuance in order to simply buy bitcoin.  In two months the price has dropped nearly 56%.  It is very hard to claim a store of value with that type of volatility. 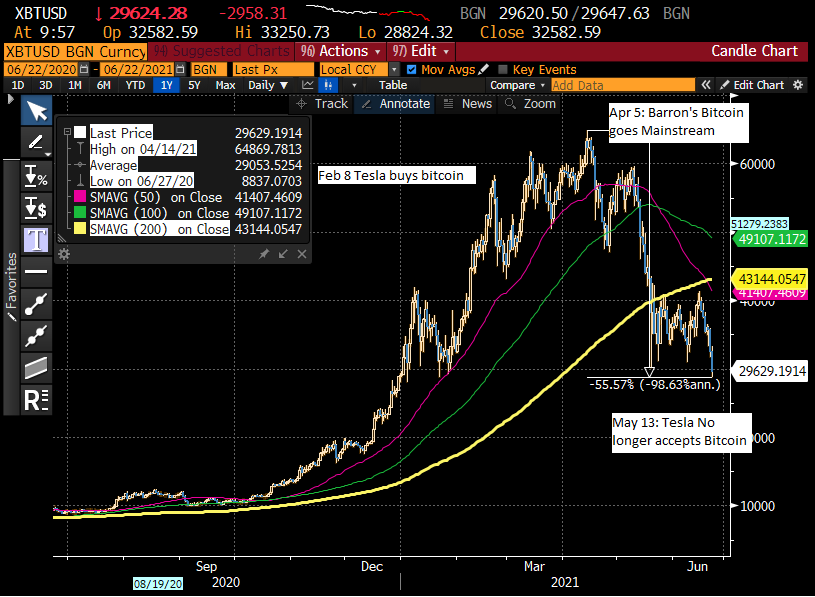 What makes things even worse is that the majority of your investors, the ones late to the party, the ones that got that TIP from a friend or coworker that made fortunes, the ones that have been flooding my phone lines and emails with these TIPS, are severely underwater.  With how connected we are to technology today and how almost everything we do is tracked and monitored it is easy to check google trends for when people became interested in Crypto.  Below shows that the large spikes of interest were in March and April of this year, AFTER, the big gains and just before the 50% correction.

While crypto is not the only speculative mania going on right now, it is the one with the largest cult like following and overconfidence.   Not every mania needs to be systemic like the great financial crisis in 2008, but the more assets that become manic, the more overconfident people get, and the more leverage they use to create those riches, the closer we get to walking off that cliff.  The fact that we are seeing numerous assets have these types of returns all at the same time makes that cliff even steeper.   At some point the tide will go out and all those people looking for riches by blindly chasing each new hot investment will be standing there naked.  Until then, enjoy the show and stay humble because no one likes the taste of humble pie.